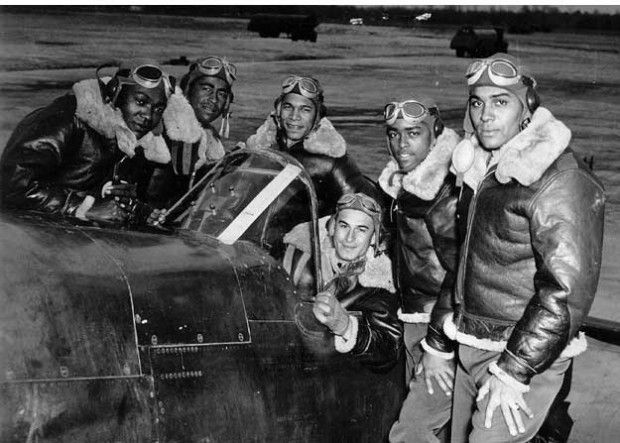 In 1939, with the threat of the Axis Powers growing in Europe, the U.S. Congress established the Civilian Pilot Training Act and the Civilian Pilot Training Program under the authority of the Civil Aeronautics Authority, with the goal of ensuring a sufficient number of American aviators would be available in the eventuality of war. Six historical black colleges and universities (HBCUs) were chosen as sites for the program, including Tuskegee Institute (Alabama), Howard University (Washington, DC), Hampton University (Virginia), North Carolina A&T University, Delaware State University, and West Virginia State College. These programs were a very important opening for African Americans because the U. S. Army Air Corps had routinely been opposed to training black pilots. The CPTP represented an incremental step toward the possibility of developing black aviators for future service.

Continued pressure from Walter White of the National Association for the Advancement of Colored People (NAACP), A. Philip Randolph, labor leader and promoter of the March on Washington Movement, William Hastie, a federal judge serving as civilian advisor to Secretary of War Henry Stimson, and Dr. Rayford Logan, a historian with Howard University, led to significant changes. On January 16, 1941, the War Department announced the creation of the 99th Pursuit Squadron and the creation of a pilot training program at Tuskegee. The U.S. Army Air Corps (USAAC) were to recruit 2,250 black men for this purpose. Other units of black airmen were added, including the 100th, 301st, 302nd Fighter Squadrons, which were later combined into the 332nd Pursuit Group—the famous Tuskegee Airmen. The 477th Bombardment Group was also trained at Tuskegee but never saw action in World War II.

Despite orders by the War Department, leaders in the USAAC resisted the idea of black pilots, generally, and the requirement to integrate training facilities, specifically. The sudden and very public resignation of Judge Hastie from his post as civil advisor to the Secretary of War Stimson caught the administration by surprise. Free of his connection to the organization, Hastie issued a detailed criticism of the USAAC’s segregation of black troops as contrary to its own policies and destructive to the morale of black soldiers. Ultimately, Hastie’s campaign had the positive effect of pressuring the organization to take concrete steps to integrate black trainees and troops.

The 99th was sent to the Mediterranean-European Theater of the war in April 1943, under the command of Lt. Col. Benjamin O. Davis Jr. Their first combat mission, as a part of Operation Corkscrew, was to help take the island of Pantelleria, and later Sicily. In February, the 332nd Group joined the 99th in Italy at Ramitelli Airfield near Campomarino.

The success of the Tuskegee Airmen advanced the struggle for equal rights for black Americans. Their achievements in combat invalidated claims that blacks lacked the character or intellectual ability for military leadership. Concurrently, the advancement of blacks in the U.S. military motivated black civilians to push for the end of segregation and for true civil rights protections for blacks. In July 1948, President Harry S. Truman signed Executive Order 9981, desegregating with U. S. military, a document that came from his Committee on Equality of Treatment and Opportunity in the Armed Forces. It is clear that the successful performance of the Tuskegee Airmen set the stage for this measure. The accomplishments of the Tuskegee Airmen, in the face of significant obstacles, helped to tear down the barriers against black advancement in American society.