It was a book discussion.

As a part of my work with the South Florida People of Color (SFPoC), I signed on to facilitate a book discussion of Carol Anderson’s White Rage: The Untold Truth of Our Racial Divide. We had been approached by the Take Down Slavery Symbols in Hollywood group, a part of the Black Lives Matter Alliance of Broward County. The organization has been working tirelessly to convince the City of Hollywood to remove street signs bearing the names of Confederate generals, including the infamous slave trader and white supremacist Nathan Bedford Forrest, that run through the predominantly black neighborhood of Liberia.

Their efforts are among dozens across the nation challenging the predominance of the statuary and symbols of the so-called “Lost Cause” in cities across the primarily South. After the June 2015 murder of the Charleston Nine by Dylann Roof, and his indoctrination by neo-Nazi groups that use the Confederate flag as their symbol, many people began to question and challenge why we continue to allow the glorification of men who would have destroyed the nation as we know it, all in order to preserve slavery. It’s not a new question, but it is now coated in the blood of yet more innocents.

Choosing Anderson’s book was strategic.The author is a respected historian at Emory University. Written in the aftermath of the rebellions in Ferguson and Baltimore, Anderson questioned the media’s focus on “black rage,” and instead pointed to a lengthy record of “white rage” against black advancement dating back to emancipation, through the Great Migration, school integration, the so-called War on Drugs, and the Obama years. Era by era, Anderson brings into focus the devastating retaliatory use of power and policy to unravel, evade, or completely undermine the full inclusion of black people in the fabric of this nation. The work is as authoritative as it is damning; it is a New York Times bestseller and won a National Book Critics Circle for nonfiction. It would prove to be a challenging read and tough discussion, but it was necessary.

Then the vitriol started. The comments to the event’s announcements reminded me of the admonitions of the Three Wise Monkeys, except in reverse– “I don’t see racism,” “I don’t want to hear about racism,” and “I don’t want you to speak about racism.”

“I didn’t know rage came in only one color.” 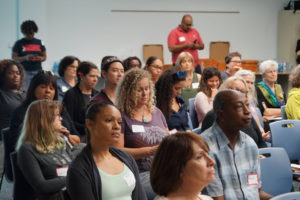 View of the audience during the discussion in Hollywood, FL, of “White Rage” by Carol Anderson. Presented by Take Down Slavery Symbols in Hollywood and the South Florida People of Color. Photography by John Kimble.

“I have to work just as hard as anyone else to succeed in life. People that think like you are the real problem. Race isn’t the issue anymore it’s the state of mind people have. Why groups like this insist on telling people that the root of their problems are based on skin color is sad.”

“I will not entertain someone who states that the problems of their community is due to white people. It’s absurd and unacceptable.“

“I love how ONLY WHITE PEOPLE ARE RACIST….I think the racist ones are putting this Lil thing together.”

“Your entire premise is that white people are bad and full of rage??? That’s extremely racist and ignorant. …You actually sound like the only racist here…..”

These were a few of the tamer comments.The sheer quantity of messages was one thing; the angry and dismissive tone of so many of them was another. Why were people so threatened by a book discussion? Why had so many not even bothered to investigate the actual point of the book instead of, ironically, proving the very point that Anderson makes within it?

Part of the explanation lies in the very reason SFPoC uses books about black history as a part of our programs: one of the advantages of being white in America is that you are rarely asked to confront the brutality, terror, and oppression enacted by whites against groups of marginalized people. Rarely do we have occasions, in our classrooms or in our conversations, to wrestle with the hard facts and painful legacies of slavery, Jim Crow, lynching, rape, and generalized oppression enacted against black people in the U.S. To turn to those pages in our past and read them aloud is to sully the mythical infallibility of our national character. We’d rather just close our ears, eyes, and mouths.

This vacuum of facts, this disinformation,, or willful ignorance, is still the breeding ground of racial oppression. If we can’t get to the roots, we can’t uproot the tree. If we don’t interrogate the source of racism, how it has grown and borne bitter fruit in every era of U.S. history, it will continue its terrible work.

If we can’t study it, if we can’t talk about it together, how can we ever solve the problem?

The book discussion almost didn’t happen. The tone of the messages alarmed our hosts, a local public library; they reached out to us to ask how we  planned to keep the peace at our event and to make sure that the discussion remained “civil” and non-violent. I understood the concern. Charlottesville proved how ugly these things can get. Besides that, it is a sad fact of American life that a shooting can take place at any time for any reason.

Still, a part of me was outraged by the host’s request. We are being subjected verbal abuse online. Why should we, the victims, be held accountable for the possible bad behavior of others?

We complied with the library’s request for a detailed outline of our plans for the event. Despite our worries, the event was amazing. More than 75 people showed up and had a powerful exchange, sharing personal experiences, asking questions, exchanging ideas, and building together.

This was yet another example of the current state of race relations in the U.S. The open racism, coming from the highest political office in our nation, is emboldening racists who don’t want to see a change in the status quo. A creeping climate of anti-intellectualism means that people who chose to engage in deep study, and desire to work toward racial equity, come under suspicion, to the point of their gatherings being threatened.

Each of us has a choice. The future of this country rests with those who are willing to do the difficult work of honest and open conversations specifically around the damage that has been done because of systemic racism. Only then can we begin to mobilize in mass to solve the problem by challenging and ultimately changing policies to create true opportunity for all.